Propargylic alcohols are one of the most useful building blocks available to the synthetic chemists, which possess two functional groups. Among the various useful reactions of propargylic alcohols, the Meyer–Schuster rearrangement to enones is a transformation of significant synthetic potential that has been widely exploited in organic synthesis. This rearrangement involves an isomerization of a propargylic alcohol to form a 1,3-transposed allenol followed by its enol-keto tautomeric protonation at the central carbon atom to form the enone product. Recently, few research groups have developed an intercepted Meyer–Schuster rearrangement to broaden the utility of this classical process in synthetic organic chemistry. Accordingly, the key protonation step was replaced by the reaction of the allenol 2 with an electrophile (E+), to generate a-functionalized complex enones.

In contrast to the known electrophilic interception methodologies, we have designed a conceptually novel strategy, i.e., nucleophilic interception of the M-S intermediate an allenol. To achieve this goal, it was necessary to alter the electronic properties of the allenol from being nucleophilic (as in classical M-S rearrangement) to an electrophilic, so that nucleophiles can easily be added. This approach provided us an opportunity to uncover; unconventional modes of reactivity of propargylic alcohols.
To convert the nucleophilic allenol into an electrophilic species, we have chosen an intramolecular nucleophilic assistance strategy. This cis-enoate assisted, nucleophilic intercepted M-S rearrangement strategy has been well developed in our research group. We have got an external funding worth ~ 40 lakhs from SERB-DST, so far published 7 research papers in highly impact international journals. And one Ph.D. student (Dr. Prabhakararao Tharra) has been graduated. Currently two more Ph.D. students are working on various aspects of this novel transformation.

The 2-(alkynonyl)alkynylbenzenes have been employed as building blocks for the generation of structural complexity under transition metal catalysis. Our interest here is, to discover and develop an unprecedented, divergent and highly selective reactivity of these structural units 2-(alkynonyl)alkynylbenzenes, under Ag(I) catalysis. As preliminary results, we observed that, the reactivity will be highly dependent on the substituent present on the alkynone part of these units. Depending upon the nature of this substituent (R1), three structurally diversified products, such as isocoumarins (R1 = H); isochromene-1-ylidines (R1 = (CH2)nOH) and naphthalene derivatives (R1 = Ar) can be generated under same reaction conditions. We are interested in performing a systematic study to understand this divergent reactivity and their mechanistic pathways. Finally we would like to extend for total synthesis of natural products. 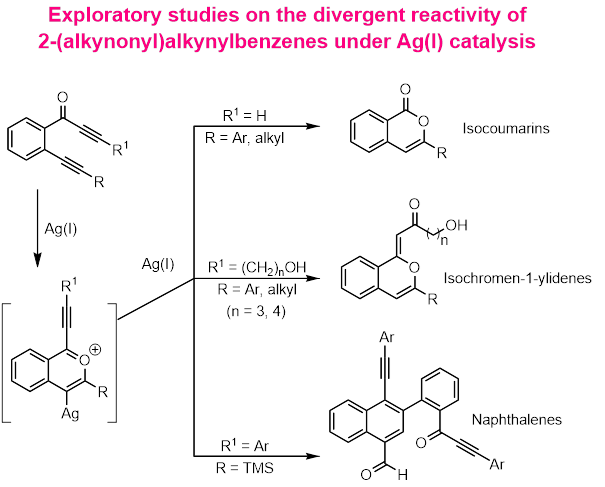 Halogenated compound are versatile building blocks in organic synthesis and medicinal chemistry. Recently we have reported the synthesis of new class of dihaloketones i.e., ,-dihalo-'-acetoxyketones employing an acetoxy-directed dihalo-hydration reaction of propargylic acetates under metal free condition. Further we are focused to understand the reactivity profile of these new class of compounds in presence of bases (Lewis and Bronstead), nucleophiles, and electrophiles. Initially we planned to explore the Lewis basicity vs. nucleophilicity of various reagents such as water, alcohols and amines. 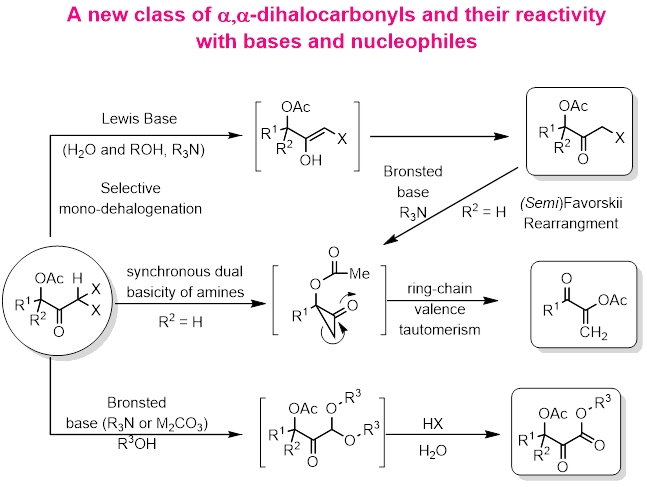 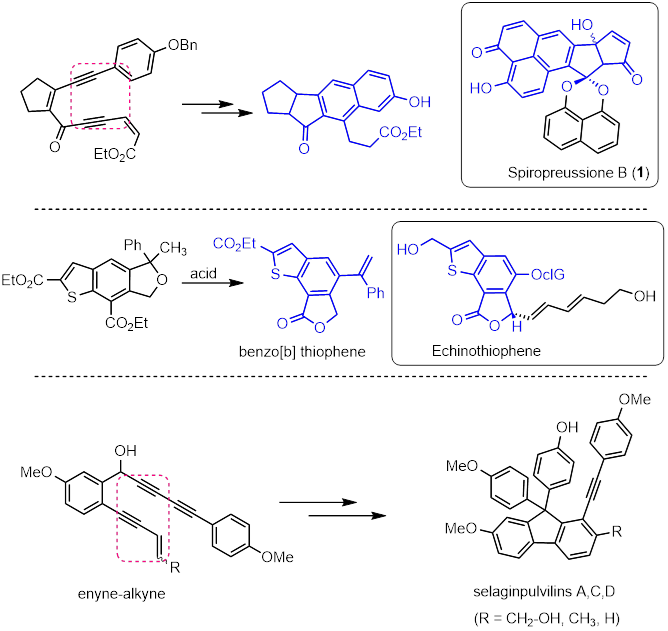 We are also interested in developing new and economic synthetic approaches to currently marketed drugs and potential drug candidates.
Siramesine has been shown to produce an enhanced antidepressant effect when co-administered with NMDA antagonists. It has also been used to study the σ2 activity of cocaine, and has been shown to produce anticancer properties both in vitro and in vivo. 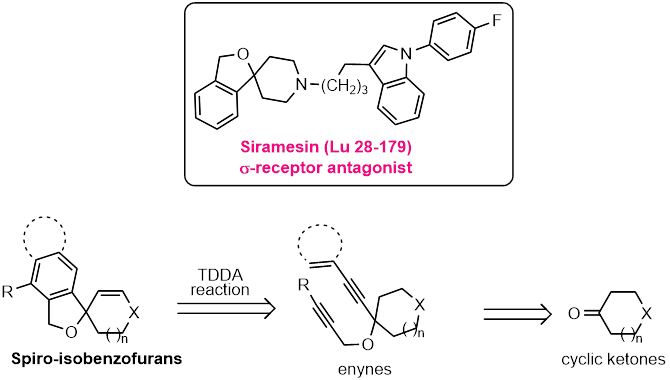